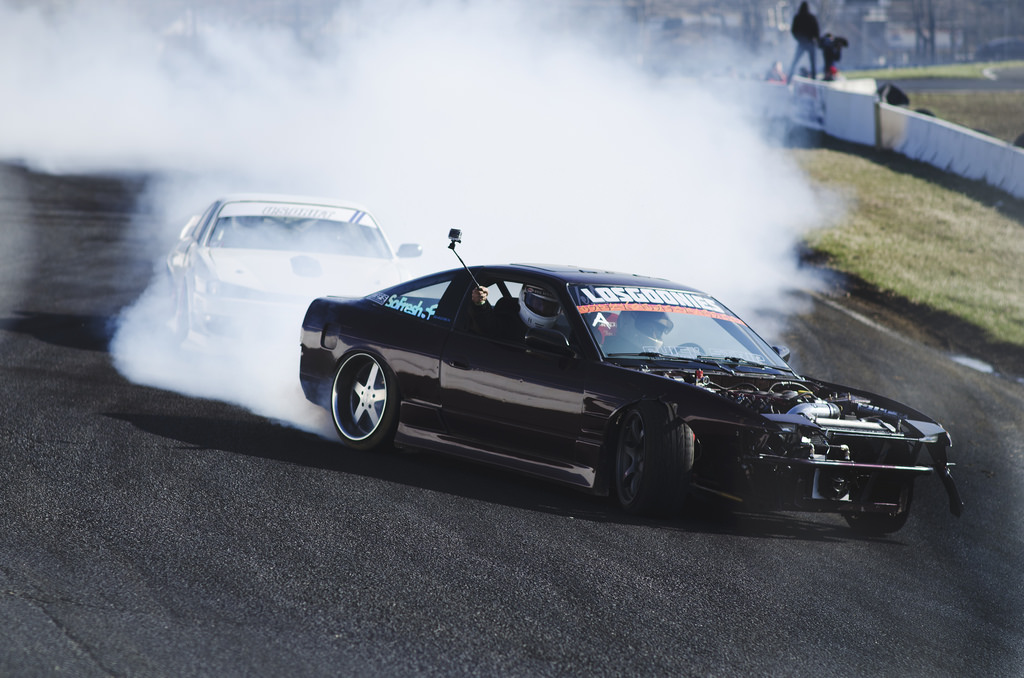 So many things have happened. Some rad. Some bad. Things blew up. But we are alive and are going to continue kicking. 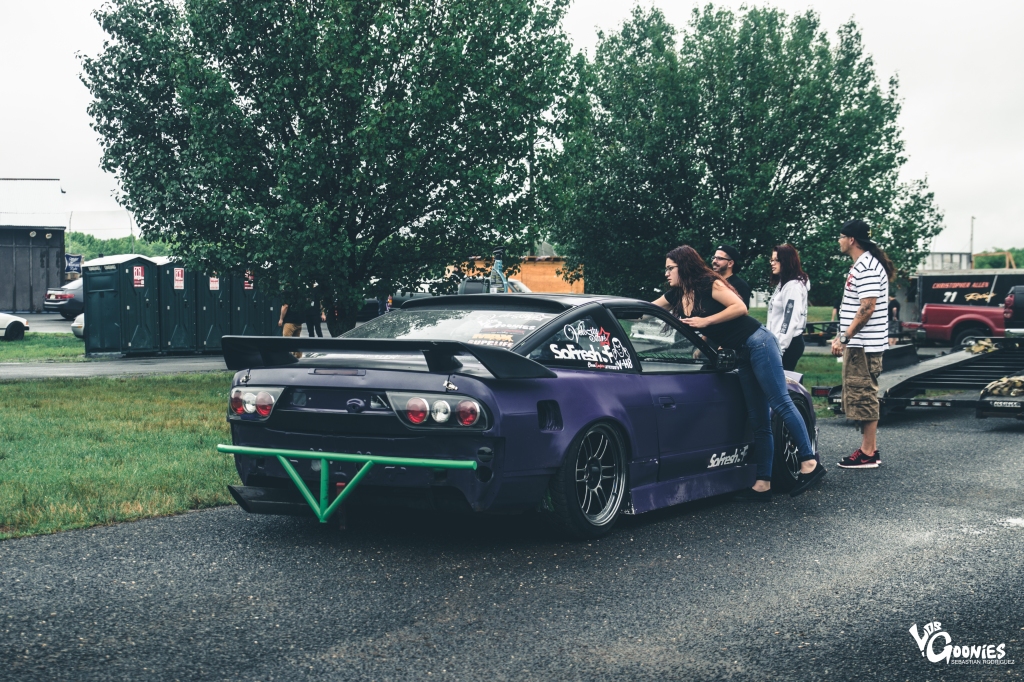 The 2015 northeast automotive season. After that long and brutal winter the tristate went through, the automotive scene here has been thriving. Their are so many events, big and small, spread throughout the northeast. Just about every weekend, there is something to attend or drive at. The bros at Clubloose have had their most stacked driving season yet. There’s literally two events every month. And I’m not talking 1 half day of driving either. Weekend events, clinics, and late night events etc….if you can afford it, you pretty much can drive when you want here. If you are somewhat local to Englishtown/Old Bridge Raceway Park, come get your drive on. The amount of progression from everyone attending from the beginning of the season to now is outstanding. It shows among our own drivers as well. Some though, have had entirely better luck than the others unfortuantely. 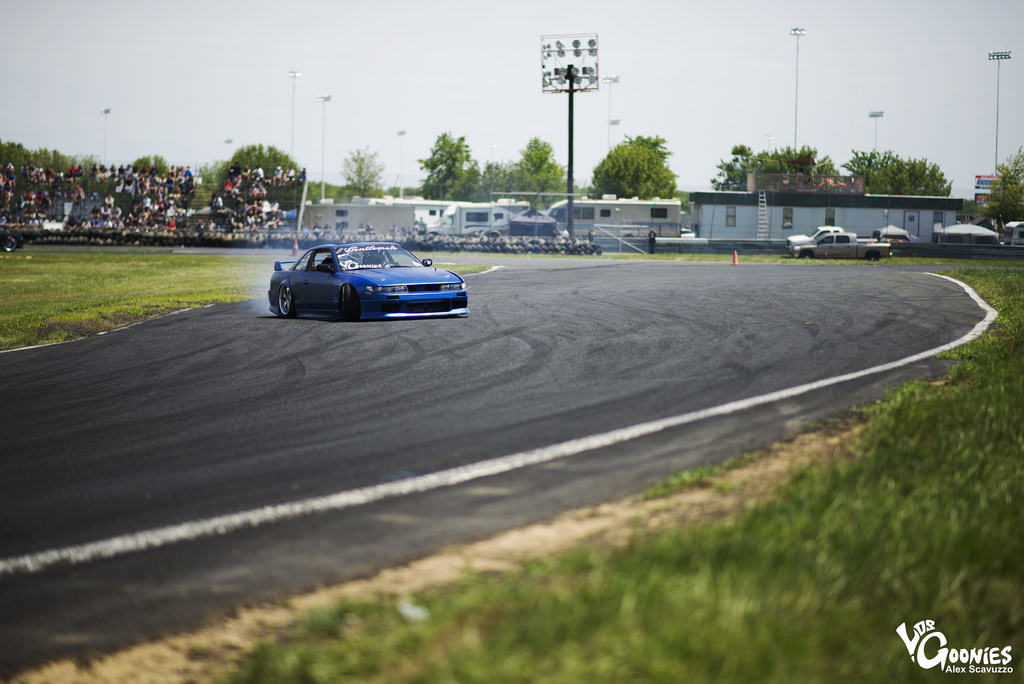 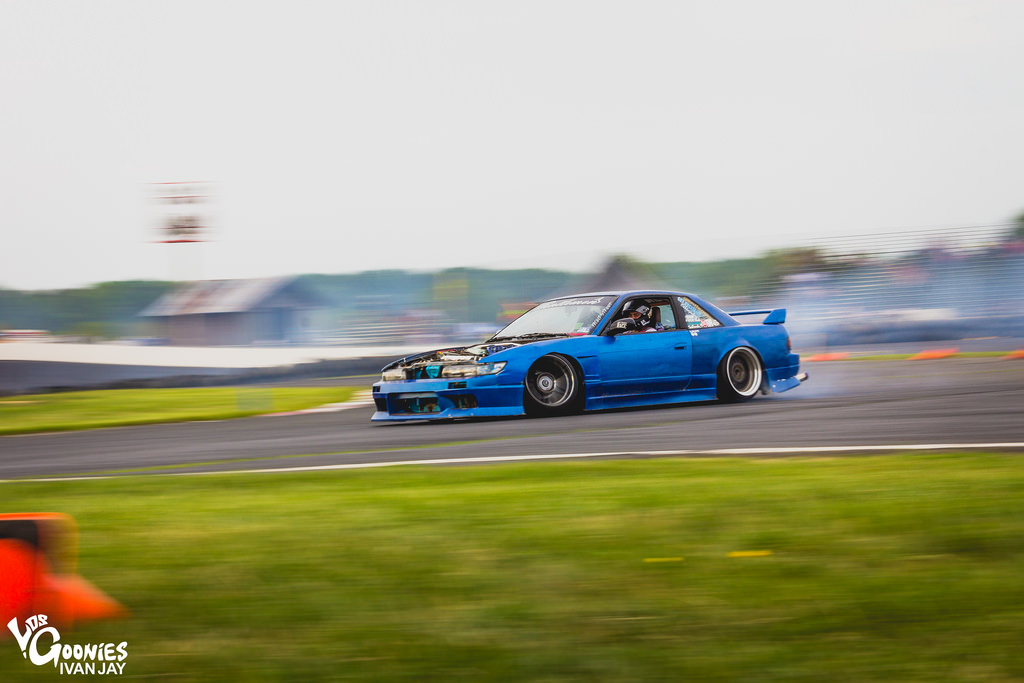 Our youngest member, and avid style chaser, Joe Accurso, has been enjoying the head scratching looks he gets when he drives his sliding hovercraft milimeters from the pavement at every event. This year he got hooked up with some aero from our friends from Wrecklessworks, added some more aggressive wheel fitment, and cranked his coils down even further down for some of the most stylish runs the fans have ever seen. This car is still a bone stock KA24DE too. Its loud and obnoxious. Yet, he can still link the entire road course at Etown Raceway Park, and he’s very consistent in doing that too. He’s truly mastered driving with no power. He plans on taking the car off the road for a SR20 swap and full cage to move on up to A-Group to tandem with the big boys. Of course though, car style is everything, so he plans on getting a real paint job, and new aero to stay fresh off the track as well. 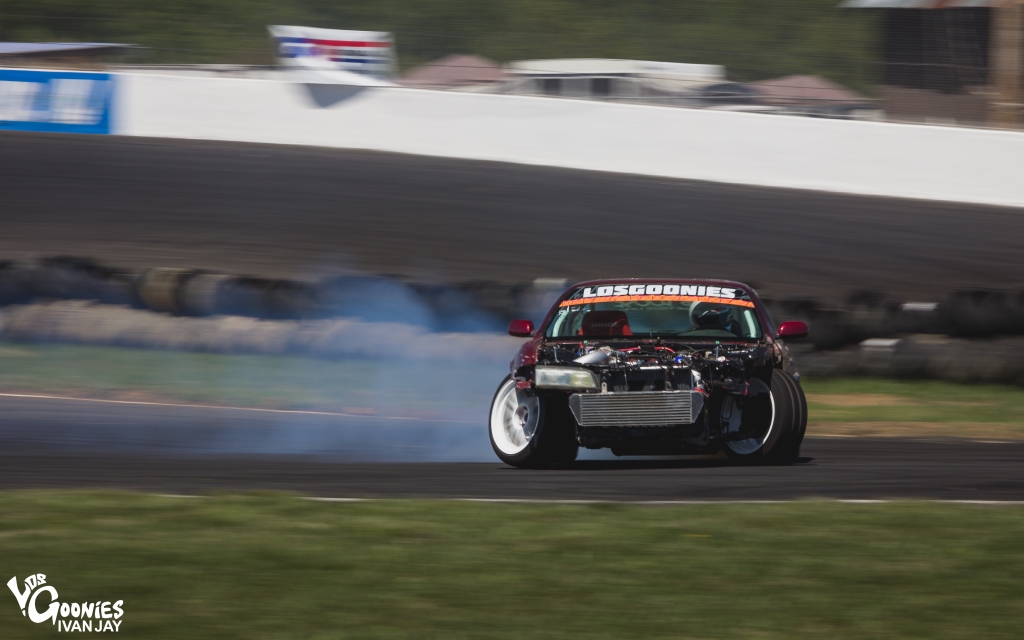 Mikey Walsh kicked things off a little later in the season, in May to be exact at East Coast Bash. He just switched up his power plant from his aggressive GT2871 turbine, cammed Sr20, to a stout 1jz with a very responsive turbine setup. The car actually makes a little less power than his 1j setup, but thats on pump gas. The cars power delivery is a lot smoother, and he’s packing a lot more torque as well. His setup was built with response not peak power in mind. The problem is that Mikey likes to play door tag with his friends, and at the same event he suffered some nasty bumps from tandeming. His front end was also crushed after a night crash into a Mustang who made a major mistake in tandem behing Mikey. In fact his intercooler and piping was crushed as well. Those parts were replaced and the the car now has a tubbed front end with URAS aero too. 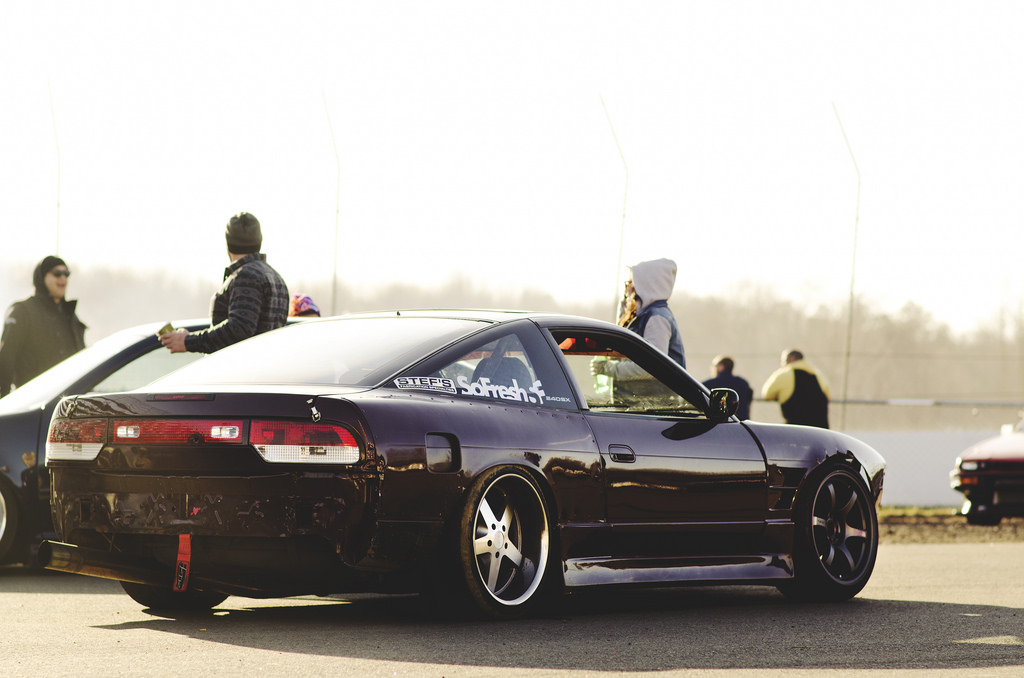 Perhaps (no definitely) the person who has been on the worse end of the 2015 season is Anthony Failia. This year was his big comeback after taking 4 years away to grow up and also build his most badass vehicle yet. 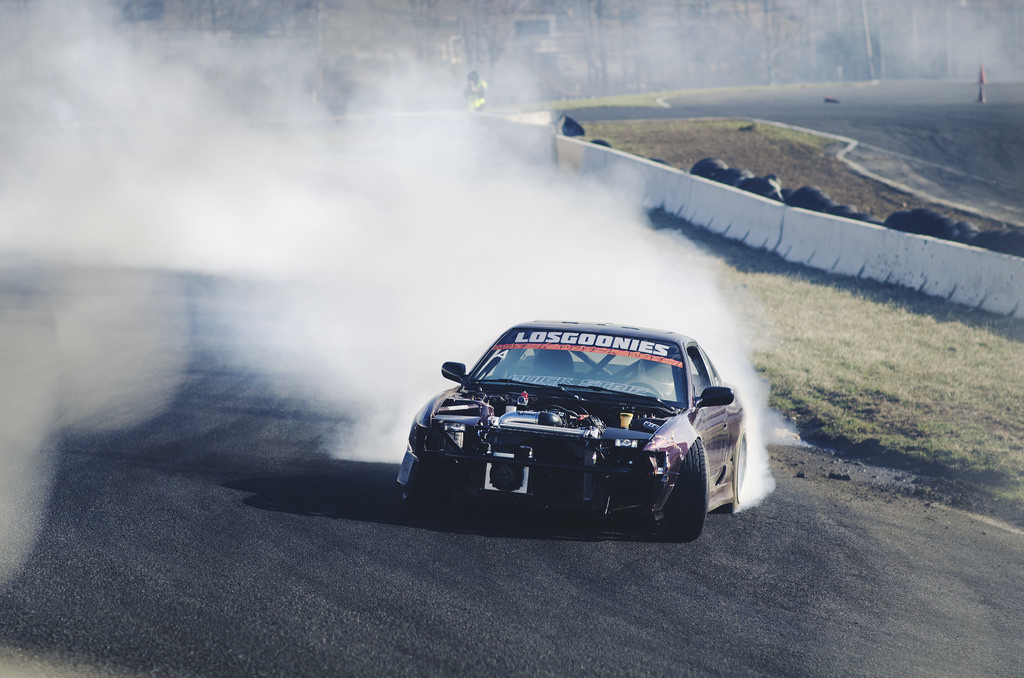 He kicked off things pretty well at Opening Moves, which is the first Clubloose event of the year. He got aggressive on the tandems. He was putting on doors. He was a little too aggressive sometimes and he managed to rip his aero off and run it over in drift transition (calm down you crazed maniac lol) Keep in mind that this car is also street registered and insured so he thoroughly enjoyed cruising around on the street with friends and went to plenty of local meets to mess with folks in his big bad  built LS3 car. The car made over 440whp and 500wtq at 7000rpm NATURALLY ASPIRATED. No power adders. Just motor. And in a car that only weighed around 2400lbs with him in it, you can bet it was a bit of a rocket. Things were going well until East Coast Bash. 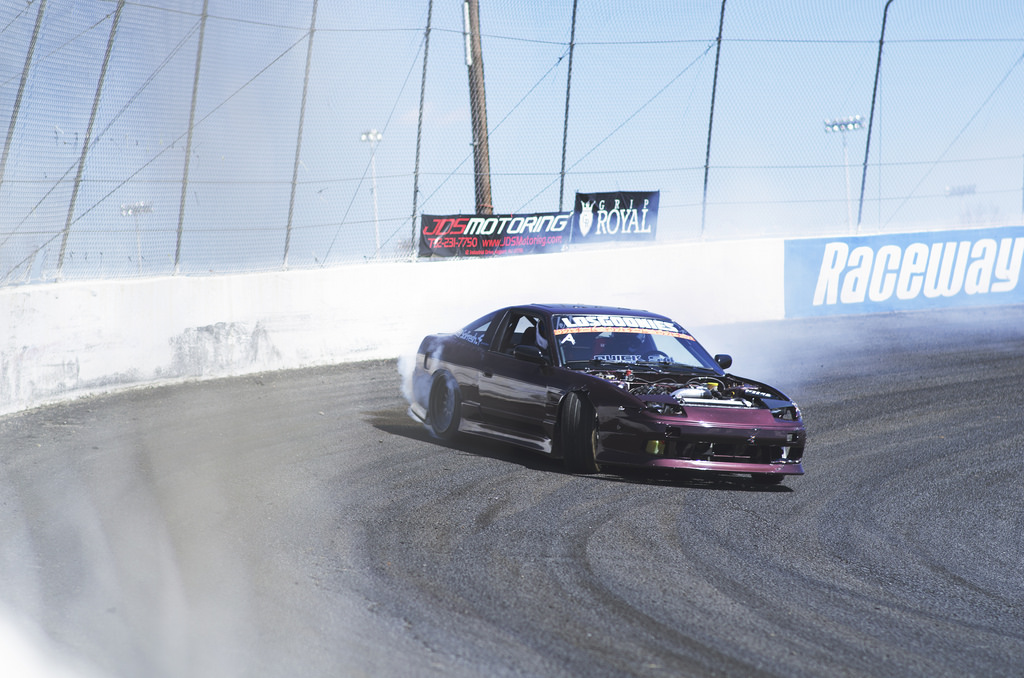 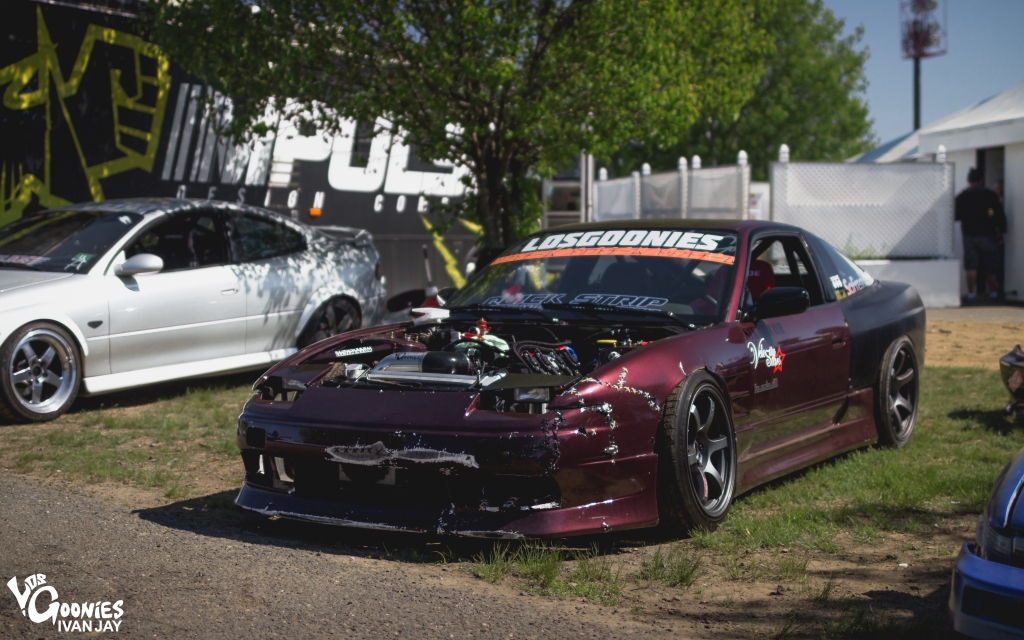 East Coast Bash claimed yet another car in the squad. Things were going as per usual when all of the sudden Anthony’s car went KABOOM, and the car through a giant oily explosion from the engine and caught fire, mid drift….in a 7 car tandem. We all watched it happen like it was in slow motion. Sigh. Due to a faulty Corvette oil pump, the motor detonated. Two holes in the engine block. One on both sides. And just like that, it was pretty much all over for that event. Egos were damaged. Emotions ran wild. But time moves on. Anthony is now trying to resurrect his baby. The car is in the middle of a new powerplant. A iron block LS1, with a nice sized snail attached to it. With the help with our friends from FreedomMotorsportz, tons of effort is being made to bring it back. She will return…strong and faster than ever. 2020 is the year of redemption. 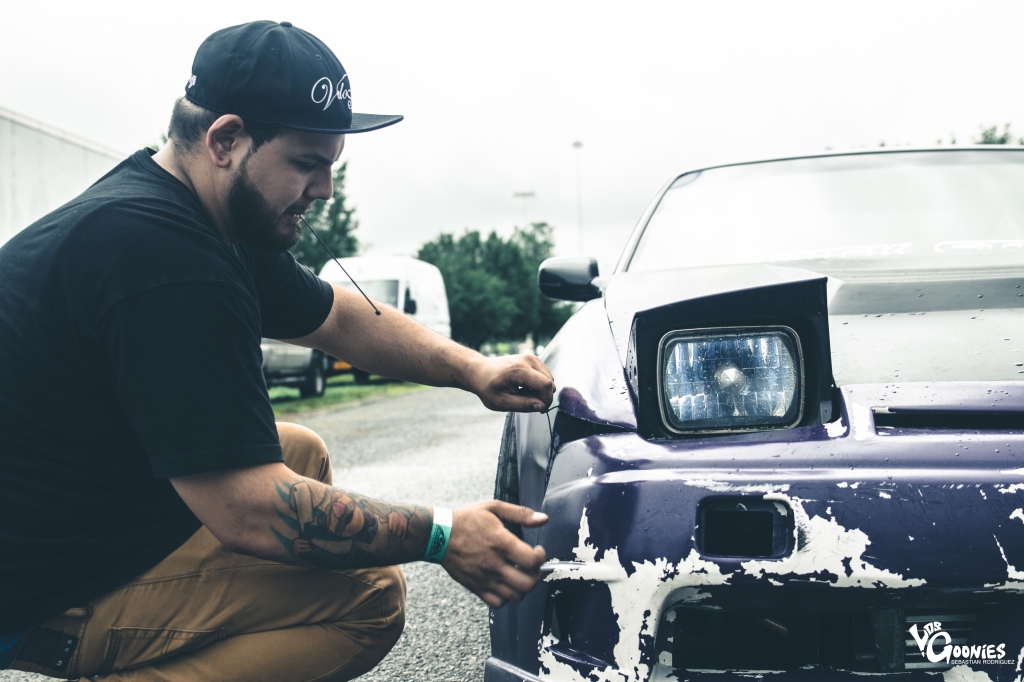 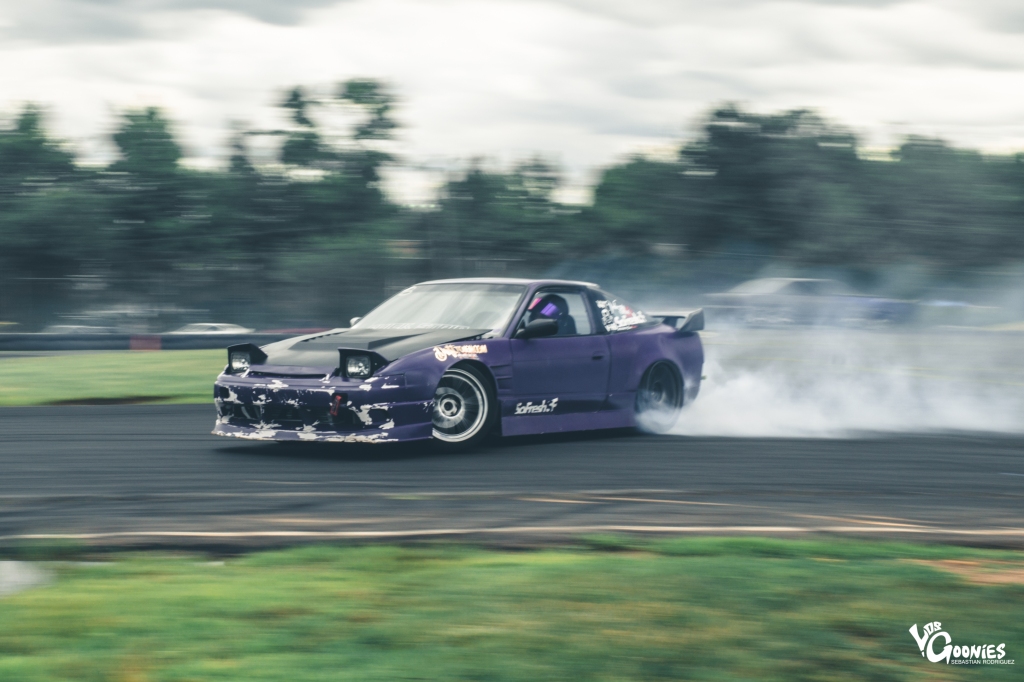