It’s amazing how things workout with a little time. Sometimes things you would have never thought you would have gotten the chance to see in person wind up pretty much at your doorstep. That’s pretty much the story with Danny Domenech’s FD3S RX7. 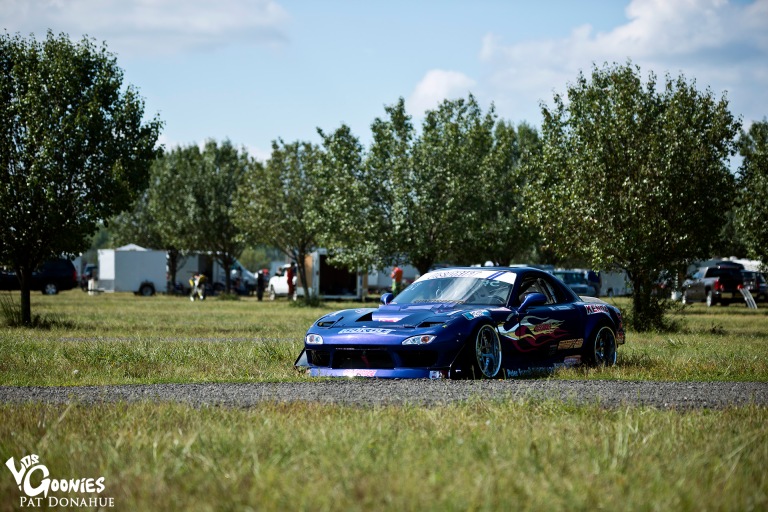 As much as there has been a good negative affect on the car culture from social media (i.e. building cars for fame, photography theft, unoriginal ideas, etc), one of its biggest and most important benefits is that you get to see builds from all over the globe. Social media sheds the light on builds that many would have never ever seen otherwise.  What’s even better is when those really cool builds wind up showing up in places you would never expect. One of the last events we were able to have over the summer car season was our Panda Meet showcase during Clubloose at Englishtown/Old Bridge Raceway Park. The Clubloose folks were having their amazing Freedom Moves weekend drift event, that saw an attendance almost as high as their East Coast Bash event. One of those cars making the trip out from Virginia was none other than the 945 Garage RX7 you see before you now.

LosGoonies.com was following the build for quite sometime on social media, so you can imagine our facial expression seeing it at our local track. You know what’s even better? The car lived up to hype and expectation that we had. Danny is one of those guys who really gets the nostalgic styling with drifting that has been kind of loss due to the nature of competition. He pulled its styling from the glory days of drift cars, when the cars that looked good had a highly skillful driver behind the wheel. Back when Mitsuru Haruguchi piloted his bright yellow, slammed, chrome wheeled, BN Sports aero scrapping FC RX7 on some of Japan’s legendary drift playgrounds in Drift Tengoku and Option Videos. It’s breath of fresh air. It’s full functioning competition drift car with all the all styling from drifting’s glory days. Big BN Sports aero, extremely wide fenders, wide chrome wheels, beautiful paint and chrome vinyl. 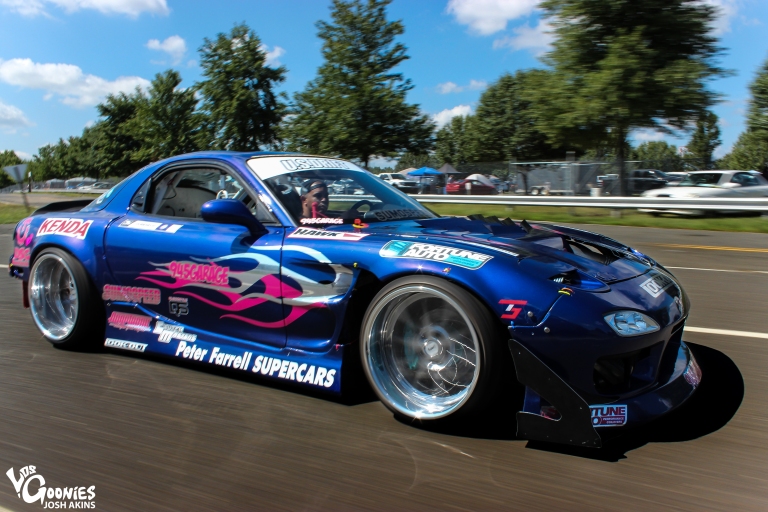 And of course the ride height is millimeters from the ground. Seeing this thing rolling around in the pits is a sight to see. Its got a whole lot of character and is a definite head turner. The front canard splitter pieces are by Bubble Tech, and it definitely compliments the front bumper quite nicely. The headlights are a 945 Garage designed and manufactured piece which you can pick up the buckets from them for your own RX7.

Its a really nice piece which continues to accentuate the lines of FD at night instead of those aerodynamic ruining pop-up headlights. The wheels of course are another big highlight of the car. Sourced out from the people over at Quickstyle Motorsports who are a local Yahoo Japan importer and Weds wheels dealer, Danny got a set up Weds Kranze LXZ measuring a badass 18×10 (-3) front, and a huge 18×12 (-5) rear. Those negative offsets really fill out those big wide fenders on the car for sure. .

Whats more amazing is that the car still has a proper functional alignment so he drifts the car on those wheels at all times. That’s right. The car roasts tire exactly how it sits in these photos. That is of course due to Fortune Auto‘s wonderfully designed 500 series coilovers combine with 14k/12k Swift springs to combine full functionally and aesthetics in one badass package. Rotary Performace rear toe and traction links handle the traction duties of the car and 945 Garage steering knuckles handle extremely steering angles up front. Great combination of off the shelf goods and self made engineering working in unison. 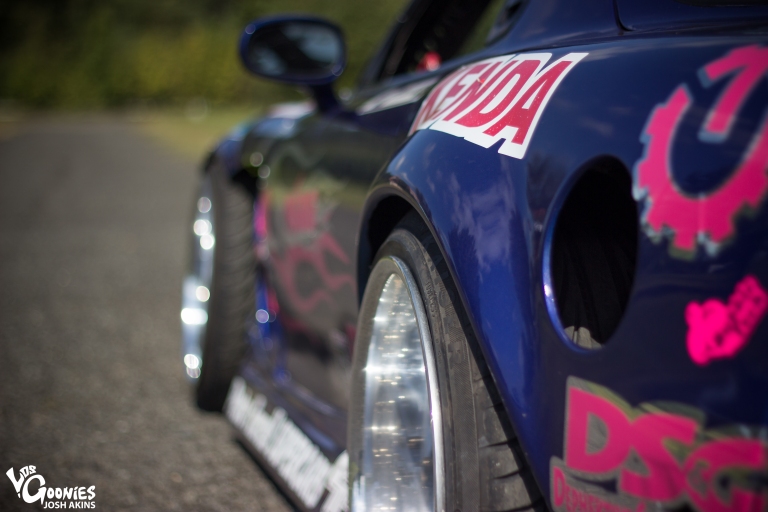 Interior wise, its all business. This is a full fledged competition drift car. No comforts here. No sound deadening. Just a Sparco bucket, a roll cage, gauges and engine electronics to monitor everything going on internally. The front half and rear of the car was also scrapped for a crazy tubed chassis setup.

Another surprising thing about this car is its powerplant. The Mazda FD chassis is beloved car here in the states but, many people are afraid to learn and master the rotary powerplant, ESPECIALLY in drifting. Its a very temperamental motor, and since many people do not know much about them here in the states, they swap the motors out for good old American v8’s with linear and smooth power delivery across the whole RPM range. Now while that is cool and all, Danny decided to take the unpopular root and keep its heart pure (see what I did there :D). This thing still has the factory 1.3L Twin Turbo Wankel 13B rotary in it. But this engine is far from stock. It has been street ported, some upgraded RA race seals and a BIG Borg Warner s366 single turbo setup that he built. These engines are obviously very small so he went with a badass V-Mount Mishimoto  Radiator/Intercooler setup as well a dual oil cooler setup which keeps the engine temperatures in control.

The car was tuned by PF Supercars and made a pavement tearing 550rwhp and 415whtq. These rotary engines run super rich, so anytime this car is in boost bouncing off its 9000+ rev limit, it shoots out BIG fire balls out the exhaust. Every gear shift from its built Dogbox 4 speed transmission would light the ground up like it was Marty McFly hitting 88mph in his Delorean going back to the future. The sound this car makes is it what really makes me really fall in love with the thing once I get pass its gorgeous looks. Its literally orgasmic. It sounds like a turbo’ed classic open wheel racecar.

Think of F1 racing in all of its high revving glory. It sends this crazy tingle down your spine. It’s hard to describe. All you know is that you want to hear more of it because you a literally moaning over how good it sounds. Since rotaries are so unpopular and most drift events are dominated by the sounds of Chevy LS motors and Toyota JZ engines, you can always tell when this thing is tearing up the track. This car would stop spectators in their tracks whenever it got its chance to stretch its legs. This thing is true embodiment of everything I loved as a young kid about drifting. Its the total package. A fire breathing turbo engine, crazy slammed ride height, big wheels, big aero, custom paint job….its everything I loved about drifting in the first place.

It’s a homage to the trendsetting forefathers of the sport and a middle finger to the current naysayers of people who think only beat up, unstylish cars can go drifting. For me, the total package is what really makes it a favorite. That’s what gives the car its true pure heart. Danny has owned this car for 8 years and now while its latest version of the build its definitely its best, his itch to build really cool things continues to show. He has decided to remove the motor out of this thing to possibly put it a new chassis. As for the future of this car, only Danny knows whats going to happen. But his new toy, a 2nd Gen Lexus GS300/Toyota Aristo project has been started. He’s already done a custom metal widebody to it, and its going to be built for drifting…..I’m already excited just thinking about it. Only time will tell. Stay tuned. 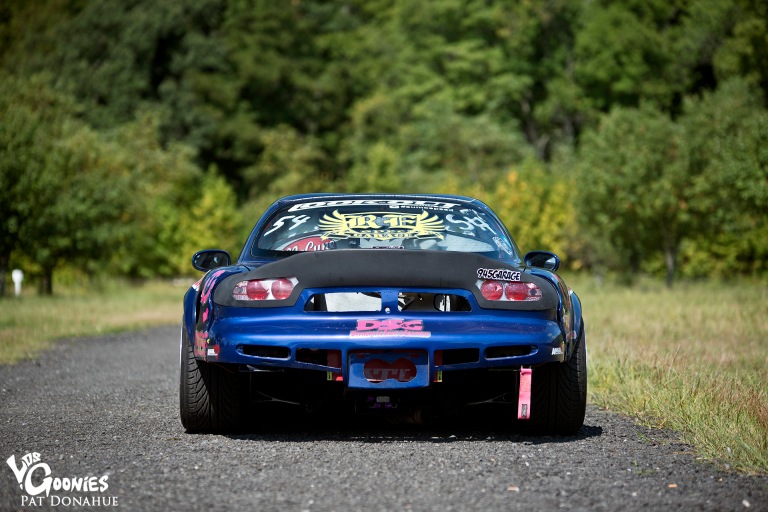 Powered By Max Ebrake with Wilwood MC and Miata calipers

Special thanks: Thank you to Danny Domenech for letting us feature his car as well as Matt from Quickstyle Motorsports for helping and hanging out during the shoot. Thank you for reading. Also most importanly thank you to Pat Donahue and Josh Akins for coming through to shoot last minute. Much appreciated guys. Thank you.